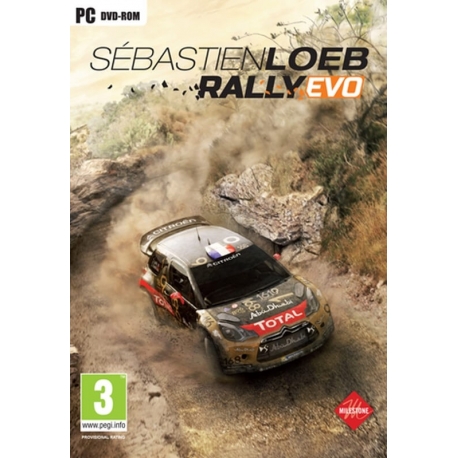 Sébastien Loeb Rally EVO is an all-new off-road racing game experience. Drive the best rally cars, from the past through to the present day, in the best rallies and off-road events around the world.

Sébastien Loeb Rally EVO is an all-new off-road racing game experience. Drive the best rally cars, from the past through to the present day, in the best rallies and off-road events around the world.

A name. A legend. One of the most exciting challenges in the world. Sébastien Loeb Rally EVO is the new Milestone IP dedicated entirely to the world of rallying. The game is inspired by the greatest rally driver of all time: Sébastien Loeb. The nine-time world champion lays claim to a career of challenges faced down, limits overcome, and goals fulfilled, through dedication, skill, and an unrivalled passion for the grittiest sport of all.

Drive the cars that made rally history and travel around the world, participating in the most important events. Display your skills, keep control of your vehicle on the toughest and most dangerous tracks, beat your rivals, conquer podiums, and revel in the glory.

Sébastien Loeb Rally EVO features the largest roster of rally cars on the market: there are more than 50 car models, including cars that accompanied Sébastien Loeb during his career. Twenty of the most prestigious car manufacturers in the world have worked closely with Milestone to bring players the most iconic and successful cars in the history of rallying, from the 1960s to the present day. Each vehicle has been carefully recreated in order to ensure realistic simulation and authentic performance.

You can also customise your car with different liveries and special materials that you can apply to the bodywork as you see fit.

Unleash your rallying desires on over 300 kilometres of tracks! In the game you'll be able to drive on the most famous tracks in the world, faithfully reproduced from their real world counterparts for the first time. The tracks are divided into Rally and Rallycross categories, covering the same stages where Sébastien Loeb set record after record.

The game also features a complete and accurate reproduction of the most exhilarating hill climb in the world: Pikes Peak. This 20 kilometre uphill time trial is one of the most demanding challenges a rally driver can take on. The entire Pikes Peak track has been reconstructed using GPS data, photographs, and video footage. With Sébastien Loeb Rally EVO you can experience all the thrills of tackling the treacherous twists and turns of Pikes Peak in cars packing more than 850 horsepower.

More than 10 different game modes lead you through the discovery of the best rally tracks in the world.
Display your skills driving on mud, snow, and asphalt in a variety of events, and master the two different track categories. Career mode gives you the opportunity to experience the life of a rally driver and compete for a place on Sébastien Loeb's team, have him as your mentor, and learn all the secrets of competitive driving. The online modes guarantee endless entertainment competing with friends and rivals from all over the world.