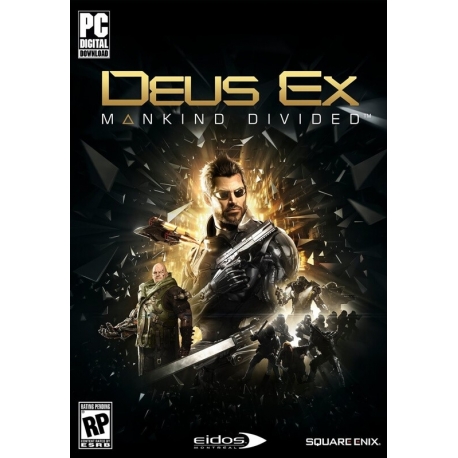 Now an experienced covert operative, Adam Jensen is forced to operate in a world that has grown to despise his kind. Armed with a new arsenal of state-of-the-art weapons and augmentations, he must choose the right approach, along with who to trust, in order to unravel a vast worldwide conspiracy.

Become the ultimate augmented covert agent. Choose from a vast array of cutting edge weapons and augmentations, customizing them exactly to your desired specifications. Unlock new abilities, increase your stealth, social, hacking or combat skills, and determine how you want your character to evolve in order to fit your play style.

In the Near Future, Mankind Stands Divided

Explore diverse locations and discover a near future setting where the fate of humanity hangs in the balance. The oppression of the mechanically augmented has created a climate of fear and resentment, resulting in an escalation of crime and acts of terror. Amid all the chaos, Secret organizations are working behind the scenes, attempting to manipulate and control the fate of mankind.

Experience the renowned world of Deus Ex, where the decisions you make and the actions you take play a crucial role in determining the game‘s outcome. Choose between combat, stealth, social, and hacking approaches to achieve your objectives. Be mindful though, as there will be a meaningful consequence to every action and choice you make.