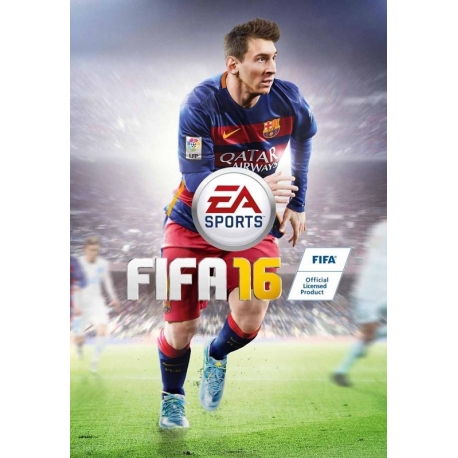 Create more moments of magic than ever before with FIFA 16. Make every match memorable with increased control in Midfield, improved defensive moves, more stars, and a new way to play.

Create more moments of magic than ever before with FIFA 16. Make every match memorable with increased control in Midfield, improved defensive moves, more stars, and a new way to play. Build your dream team in FIFA Ultimate Team, or compete as one of 12 Women’s National Teams for the first time ever in the FIFA franchise, including Germany, USA, France, Sweden, England, Brazil, and more. FIFA 16 innovates across the entire pitch, delivering a lifelike and authentic football experience.

Innovative new features. Play your way, in your favorite modes, and experience all-new gameplay elements that bring each match to life. FIFA 16 brings Confidence in Defending, Control in Midfield, and gives you the tools you need to play and experience an incredible match of football.

Build your dream team. Choose from among the best football stars of all time and build a team to take home the glory in FIFA Ultimate Team. Join an online community of more than 15 million fans to buy, trade, and sell players. Sign up to throw down against your friends’ teams or compete in solo single-player tournaments – player stats, scores and team standings get updated every week.

Get up to 15 FUT Gold Packs over 15 weeks. Standard Edition players can extend the excitement with one new FIFA Ultimate Team Gold Pack delivered every week for 15 weeks. Each pack contains a mix of 12 items, including players and consumables: at least 10 are Gold, 1 of which is Rare. These items include FUT players, contracts, stadiums, managers, staff, fitness, healing, balls, kits, badges, and chemistry styles. Gold Packs may also contain players rated 75+ in-game, rare items like enhanced player attributes, longer contracts, and the most coveted players.