> Of Kings and Men 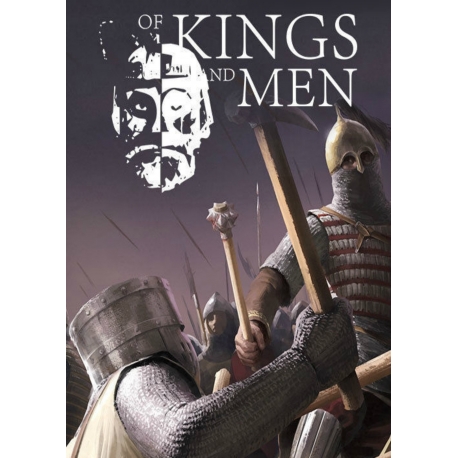 Of Kings and Men

Of Kings And Men allows you to experience huge, player-driven battles like no other. Engage in massive combat with more than 200 players, capture territories, or practice your fighting skills in competitive matches with intuitive melee combat.

Of Kings And Men allows you to experience huge, player-driven battles like no other. Engage in massive combat with more than 200 players, capture territories, or practice your fighting skills in competitive matches with intuitive melee combat.

Throughout Early Access, Of Kings And Men will introduce strategic elements, allowing players to conquer and control the land by political, economic or military means. Send armies to protect your cities and invade enemy territories. Lead your troops into decisive orchestrated sieges against player-built fortifications that are fought with hundreds of friends and foes simultaneously. Every victory or defeat shapes history forever.

Of Kings And Men is an independently developed, third-person multiplayer ‘Persistent Medieval War’ game.
Set in 13th century with both European and Eastern influences, you play as a character in a vast open world full of alliances and conflict, with an emphasis on player-driven experiences.

Whether its fighting 1v1 duels or participating in colossal player-coordinated battles, with over 200 players, there will always be constant warfare for you to be involved in.

Choose your weapon from a variety of Polearms, Spears, Swords, Shields, Axes, Maces, Bows and Crossbows. How you play and your combat style will change depending on your choice in armament. Find your role in Of Kings And Men & let the battles commence!

Battle amongst your allies in large-scale battles with a fluid combat system that is easy to pick up – but difficult to master! You can control the direction of swings and blocks with your mouse and you need quick reactions and an understanding of your immediate surroundings to survive an encounter unharmed.

You can level up your character to better suit your combat style, however – to really make a difference its your own player skill that matters.

There will be several Battle Modes implemented, where you can team up and fight competitively against other players, each with their own unique maps and objectives assigned. Your personal equipment and statistics will carry over, but also everything you earn in this mode will influence the broader The Epic world; you will earn money for your personal character but also money for your faction that will feed back into the economy of the world to construct new buildings and equipment.

The current Battle Modes we have lined up are:

– A traditional competitive setup. Players have one life per round and respawn when the round ends and a team has won. Kill or be killed.

– For much larger battles, with potentially hundreds playing at a time. Round-based, whichever team is the last standing earns points.

– Capture different areas of the map before the other team. Whoever has the largest overall percentage wins.

‘The Epic’ is the Persistent open world featured in Of Kings And Men.

The world of OKAM will be very barren in the beginning, until players start to construct outposts; over time, the more successful outposts will turn into villages, towns, cities. All of that is fully player-controlled and designed. While outposts or small production facilities can be run alone or with a group of friends only, the larger you want to become the more feudal you have to become.

There are various different roles that appeal to different players. There is no actual role classification; you can create characters that specialize in one, or try and do everything.

If you want to become more than a sole wanderer around the land you will either need to form or join a faction. Factions will control areas within the world, sometimes contested, sometimes full control of entire cities.

Of Kings And Men will feature a vast world where players can explore and discover various resources across the land that will benefit both you and your faction.

There will be a constant struggle for power, and you as the players will write your own stories of conquests and Epic battles.

There will be a symbiosis in how war affects the entire world. Fighting battles will earn factions silver to fund crafting better equipment, better defenses, which will then be used to continue this warfare. OKAM will have wars with hundreds of players, going on for extended periods of time, with political struggles inside and outside.

The world of The Epic will consist of ‘rounds’, potentially spanning several months – we are unsure of an exact timespan right now, it will greatly depend on our playerbase.

Whenever a round ends the world is reset, but honor and achievements earned will carry over as part of the history of the world and you may unlock some nice features along the way!

Of Kings And Men is a game about stories written by the players. It is not a survival game.

Whilst you can spend your time wandering the world alone, we believe that the game will best be enjoyed if you have something to explore and fight for, teaming up for great battles that will be recorded in the history of the game.