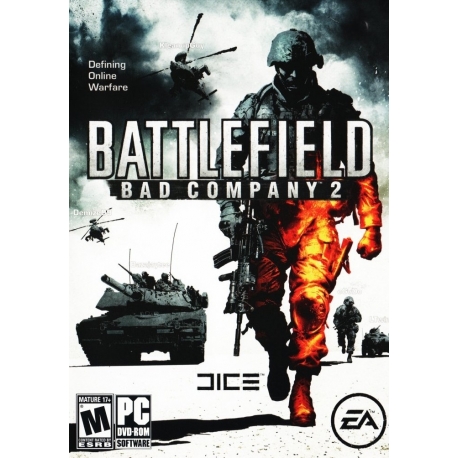 Battlefield Bad Company 2 brings the spectacular Battlefield gameplay to the forefront of consoles and PC - featuring best-in-class vehicular combat set across 8 huge sandbox maps each with a different tactical focus.

Battlefield Bad Company 2 brings the spectacular Battlefield gameplay to the forefront of consoles and PC - featuring best-in-class vehicular combat set across 8 huge sandbox maps each with a different tactical focus.

New vehicles like the All Terrain Vehicle (ATV) and the UH-60 transport helicopter allow for all-new multiplayer tactics in the warzone, extensive tuning ensures that this will be the most satisfying vehicle combat experience to date.

Tactical destruction is taken to new heights with the updated DICE ‘Frostbite’ engine. Players can now take down entire buildings or create their own fire points by blasting holes through cover, thereby delivering a unique experience in every match

Players can also compete in 4-player teams in 2 exclusive squad-only game modes, fighting together to unlock exclusive team awards and achievements. Spawn on your squad to get straight into the action, and use gadgets such as the tracer dart in-conjunction with the RPG to devastating effect.

Excellence in the battlefield is rewarded with an extensive range of pins, insignias and stars to unlock along with 50 dedicated ranks to achieve.

Variety also extends into the range of customizable kits weapons and vehiceles available. With 4 distinct character classes, 46 weapons, 15 gadgets, 13 character specializations and over 15000 kit variations to discover and master players will be able to fine-tune their preferred fighting style to give them the edge in combat.

8 Huge Multiplayer Maps. Each with a different tactical and gameplay focus and set across a variety of environmentsUltimate Online Vehicle Warfare! 15 land, sea and air vehicles, each with a tactical advantage during play. Race into action with the ATV or rain death from above in the UH-60 transport helicopter with its 2 side-mounted rail gunsAll-new Squad Gameplay. Team up with 3 other players and fight together to unlock special awards and achievements in 2 squad-specific game modesDestruction 2.0. Take down entire buildings, create firepoints in cover or blow it up entirely! In Battlefield Bad Company 2™ there will be no place to hide! ‘Play It Your Way’ experiment and refine your ideal combat style with 4 character classes (medic, assault, recon and engineer), 15000+ kit variations, 46 weapons (200 different customization opportunities), 15 gadgets and 13 character specializations.Awards and Achievements, combat efficiency and performance is rewarded with special awards such pins, stars and insignias which contribute to unlocking 50 ranks