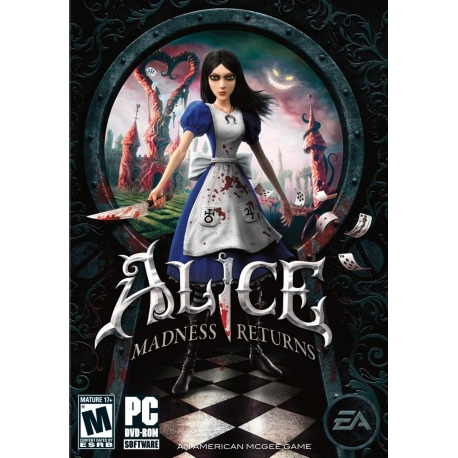 Alice: Madness Returns delves deep into the dark and violent side of the imagination, creating a nightmarish Wonderland where Alice must face the demons that haunt her visions.

This isn't a fairytale.

Alice: Madness Returns delves deep into the dark and violent side of the imagination, creating a nightmarish Wonderland where Alice must face the demons that haunt her visions.

Eleven years ago a horrific fire took Alice’s family from her and left her mind horrifically scarred. Afterwards she was confined to Rutledge Asylum, where she struggled to confront her demons by slipping further into her fantasy world of Wonderland. Now, after ten years, she has finally secured her release—yet she still bears the heavy psychological burden of that tragic event.

With her mind in tatters, she is unable to resolve the fear prompted by her strange memories, dreams, and visions. Perhaps she’ll do better in Wonderland. She always has. She travels there, seeking what the “real” world can’t provide: security, knowledge, and the truth about the past. But in her absence, Wonderland too has suffered. Something has gone horribly wrong, and now a great evil is descending upon what once was her beautiful refuge. Can Alice save Wonderland—and herself—from the madness that consumes them both?

• Explore a dark and shattered Wonderland: Encounter familiar but now strange characters, including the Cheshire Cat, the Mad Hatter, the Caterpillar and the Red Queen.

• Magical abilities: Obtain peculiar abilities in Wonderland such as floating with Alice’s dress, shrinking, or growing to towering sizes in order to crush enemies.