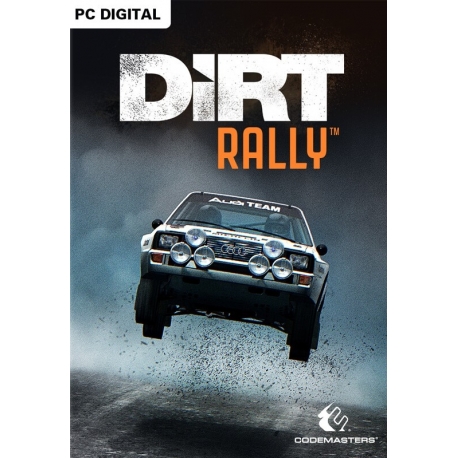 DiRT Rally - a new world of DiRT. A pure expression of rally, the pinnacle of off-road motor racing and it begins now, in Early Access, with regular free updates including new locations, new game modes and new vehicles.

Welcome to DiRT Rally - a new world of DiRT. A pure expression of rally, the pinnacle of off-road motor racing and it begins now, in Early Access, with regular free updates including new locations, new game modes and new vehicles.

DiRT Rally captures the essence of what makes rally unique – that sense of trying to remain in control of your emotions, as you hurtle along dangerous, undulating roads at breakneck speed, aiming to squeeze everything out of your car whilst knowing that one crash could irreparably harm your stage time. It’s the ultimate test of a driver’s skill, and it’s the ultimate in high risk, high reward gameplay.

Every stage will test you differently, as you feel out grip across varying surfaces and adapt your style to a range of different weather types. As the car suffers attrition you’ll need to account for mechanical damage whilst your dedicated rally team tries to keep you competitive with time-limited repairs between stages. As stages string together, each rally becomes a marathon-like test of concentration and skill, as you trust in your co-driver and your own ability to react and adapt, in order to stay competitive and chase that ever-elusive perfect run.

• DiRT RALLY AND THE COMMUNITY: The community is DiRT Rally’s co-driver and their feedback will help shape the evolution of the experience. For players joining DiRT Rally in Early Access and the road ahead, the team want their feedback. They’ll be helping to test theories and providing vital data that will help to refine DiRT Rally.
•EXPERIENCE 8 MASSIVE NEW REAL-WORLD RALLY LOCATIONS: DiRT Rally now offers eight massive environments and 50 challenging rally stages and 2 official World RX tracks each with 2 additional junior circuits, with more to follow. Drive them during the day - in dry, overcast, sunny, misty, wet, rainy and snowy conditions - and then take them on at night for a very different, intense experience that will challenge the elite.

• Hell, Norway – this explosive circuit is made from the rock used to carve out a munitions silo

• Holjes, Sweden – One of the most atmospheric circuits set deep in the forest of Värmland
• Lydden Hill, UK – Known as the ‘Home of Rallycross’

• Pikes Peak, USA – the epic hill climb over tarmac and gravel, it’s a battle of nerve and speed to the top.
• Powys, Wales - Muddy, wet gravel stages and forest runs often in the rain during the day and at night.
• Monte Carlo, Monaco – Tight, twisting, dangerous roads covered with snow and ice that wind through the Alps. Snow and mist affect visibility during the day and at night.
• Argolis, Greece – Sweeping dusty gravel stages that take their toll on even the strongest rally cars in the intense heat of the Mediterranean in the bright daylight or at night.

• 28 CARS OVER 7 NEW AND CLASSIC CLASSES TO DRIVE NOW: Rally is about having the right car and DiRT Rally will have all of the right cars.

• NEW DRIVING MODEL: The physical simulation for DIRT Rally has been completely rebuilt to adequately capture how it feels to race across changing surfaces, and loose surfaces collect under the wheels during lateral sliding, creating a completely new feel to sliding around corners.

• CHAMPIONSHIPS, ASYNC & CUSTOM EVENTS: Across Rally, Hillclimb and Rallycross, take on a single stage and learn the calls in Custom events, compete against increasingly skilled opposition in seasons or prove yourself against the entire community of players in Async challenges.

• TEAM MANAGEMENT: Hire up to four engineering staff to work on your vehicle between stages. Drill down and hire them based on their contract length, wage demands, and on the insight they can offer over upgrades to the vehicles you own. Keep renewing an engineer’s contract and you’ll be able to give them perks that will help upgrade specific vehicles faster.

• UPGRADES: As you drive a vehicle in events your engineers will become more familiar with it and will research upgrades that will unlock the full potential of the car.
DiRT Rally’s comprehensive upgrade system makes meaningful improvements to the car’s handling and performance to stay competitive

• TUNING: Delivering the most comprehensive tuning system ever in a DiRT game, DiRT Rally enables players to tune their cars based on weather conditions, car condition and more to ensure they can refine their setup and get the car feeling right for their driving style.

• DAMAGE & REPAIRS: Off-road racing is tough and unforgiving; competing causes vehicles to suffer wear and tear as replicated by DiRT Rally’s comprehensive mechanical damage system. Thankfully, damage can be repaired by hiring eEngineers to work in the team’s Service Area between stages. Much as in the Colin McRae Rally games, there’s a finite amount of time to repair cars between rally stages.

• PHYSICS-BASED ASSISTS: Being fast is about skill, not raw speed. Whilst DiRT Rally allows players to experience cars in their purest form it also offers a selection of real world assists, similar to those seen in race and road vehicles. Traction Control works to minimise wheel spin, ABS increases your braking ability by preventing the wheels from locking up and Stability Control keeps your car from over rotating in the corners.