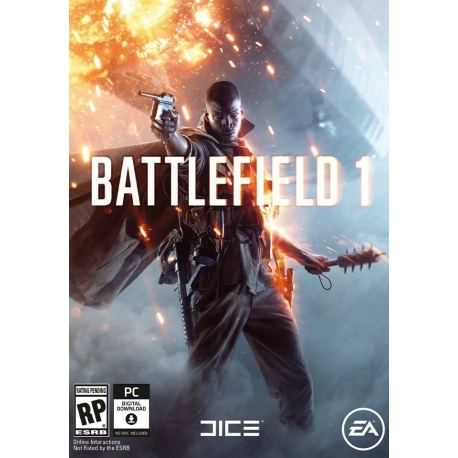 Join in epic multiplayer battles with up to 64 players, and adapt your tactics to the earth-shattering environments and destruction. Fight as infantry or take control of amazing vehicles on land, air and sea, from the tanks and bikes on the ground, to biplanes and gigantic battleships, and adapt your gameplay to the most dynamic battles in Battlefield’s history.

Discover a new world at war

Join in epic multiplayer battles with up to 64 players, and adapt your tactics to the earth-shattering environments and destruction. Fight as infantry or take control of amazing vehicles on land, air and sea, from the tanks and bikes on the ground, to biplanes and gigantic battleships, and adapt your gameplay to the most dynamic battles in Battlefield’s history.

Epic 64-Player Multiplayer Battles – Squad up with your friends and join in the most epic multiplayer battles in FPS history with up to 64 players fighting as infantry or piloting vehicles ranging from tanks and bikes on the ground to biplanes and gigantic battleships.

Experience the Dawn of All-out War

Be a part of the greatest battles ever known to man. From the heavily defended Alps to the scorching deserts of Arabia, war is raging on an epic scale on land, air and sea as you witness the birth of modern warfare.

Earth-shattering Intuitive Destruction – With intuitive destruction no battle is ever the same. Destroy vehicles big and small, and demolish entire buildings. From tiny wooden houses to massive stone forts, even the grounds on which you’re fighting can be blasted apart.

War Stories from the Far Edges of the World – Discover a world at war through an adventure-filled campaign that captures the variety of a global conflict through the eyes of several different characters all united by this first modern war.

Typically, a round in a Battlefield game is completely contained to that one match. You play, you win or lose, and then you move on to the next round. That all changes in Operations, a new game mode coming to Battlefield 1. In it, the outcome of the current round carries over to the next map, giving you the opportunity to fight a sequence of inter-connected battles.

Operations offer epic journeys across several maps based upon real battles of World War I. We wanted to offer a large and epic experience with a focus on teamplay and frontline combat. Adding this meta-layer to the game mode, and stretching it across multiple interesting locations that both look and play very differently, adds a whole new layer of scale and variety to the battles in Battlefield 1.Your team can win on one map, proceed to the next map, and actually see the map you previously fought over on the horizon.

As an attacker you’ll hear the commanding officer’s whistle as the order to charge the enemy trench is given. You’ll run side-by-side with your teammates as you storm towards the enemy defensive positions on foot, in tanks, airplanes, boats, and on horseback. As a defender, you’ll dig down as you hear the alarm go off signaling an incoming attack. You’ll man the stationary machine-guns and cannons to aid you as you rain hell on the advancing enemy attackers.

The attackers must capture and hold all defensive positions in order to capture the sector that is being fought over. Once this is done, the defenders will fall back to the next sector and regroup. The pacing and variety between the different sectors vary widely, since each sector offers a different amount of objectives to capture and defend as well as varied layouts and choke points.

The attackers must take territory and push the frontline forward, while the defenders are trying to hold the line. Should the defenders fail to hold their ground on a map, the Operation doesn’t stop here: they will fall back and regroup on a different map, while the attackers will continue to push. Sectors may fall, but players reinforced by gigantic Behemoths can still turn the tide.

We wanted to create a Battlefield experience that was not just bite-sized, but actually spanned beyond an hour of playtime. Something epic and compelling for players who wanted a chance to immerse themselves in this first global war, and capture the stories of how different battles were deeply connected to one another. This kind of frontline combat really captures the essence of WWI clashes, intimate and deeply rooted in breaking through or holding ground.

They feel fast because they are

If your weapon of choice is an automatic rifle or a powerful LMG, Battlefield 1 is loaded with guns to scratch your trigger finger on. In general, all of the weapons might feel a little faster than you'd expect. On top of adding drag and gravity to the bullets themselves, we increased the bullet velocity. This speeds things up and makes the gunplay feel more authentic.

There are your Shotguns (great for blasting enemies from up close), SMGs (made for short range rapid-fire), LMGs (amazing at tearing things apart from medium range), Semi Autos (balanced and powerful), Sidearms (great in a pinch), and Sniper Rifles (which do exactly what you think).

There's a ton of variety

Each weapon type has multiple different weapons to choose from. The weapons of the era were incredibly varied. In fact, many of the weapons of World War I were the first successful versions of those weapons. The first SMGs and Automatic Rifles were deployed during the era, and you can use them in Battlefield 1.

Technology hurdled forward during World War I, leading to absolutely incredible, efficient weapons that were damn good at doing what they were designed to do. Whether you're blasting holes in walls and taking down hidden enemies or sniping from across the map, you'll find the gunplay inBattlefield 1 feels modern and fun.

We definitely want to allow you to customize your weapons in Battlefield 1, but we also heard your feedback that we should try to find a way to do this without adding hundreds of additional attachments. That's why Battlefield 1 utilizes pre-set Loadouts for each weapon - you're still able to customize your weapons to make sure they work with your playstyle, but in a more focused way.

Each weapon has up to three Pre-Sets

Maybe you want a shotgun that packs a little more punch? Or maybe you'd rather one that trades stability for accuracy? The different weapon Pre-Sets should help you out. Some have up to three, giving you different ways to play with the same weapons. You're able to customize them as well, changing the zoom levels, reticles, and more.

Getting up-close and personal was an important part of The Great War, and while you have plenty of options if you'd rather keep your distance, you'll also be able to use different types of melee weapons, each with their own attack speeds and damage outputs. Some even double as tools – giving you the ability to cut barbed wire, destroy barricades, or even damage light vehicles.

Being able to close the gap between you and your enemy is important, especially when you're going for a melee kill. Attaching a Bayonet to the end of your gun helps make that a little easier, letting you charge at your enemies. Make contact, and they're on the fast track to the graveyard.

Besides being able to toss traditional fragmentation grenades, you'll also be able to use gas grenades (low damage, but their gas lingers for a long time), incendiary grenades (high damage, but for a limited time), and more. Using the right one at the right time can be the difference between life and death.

The audio fidelity is top notch

DICE is known for delivering some of the best audio quality in gaming, and we're not going to disappoint with the weapon sounds in Battlefield 1. From the BANG of a shotgun to the CLINK of an empty click, we recorded a huge amount of real-world audio to use in the game. You can even tell when your magazine is running out of ammo now - your firing sound slightly changes when your ammo is low.